T.I. on Trump ahead of the inauguration 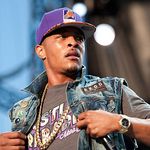 In an interview with Toronto Star, T.I. said

I don’t want to be premature with my skepticism. There are some remarks that are being made and stances taken that do concern me. I don’t think it has much to do with the presidency, it’s just more (Trump’s) style, demeanour and his temperament. The things he finds appropriate to say in regards to his opinions of other people. Those things are a bit disheartening. As far as what to expect from his presidency, I don’t want to be presumptuous, but actually see what happens. […]

I see what’s going on and I’m just speaking as I see it necessary. I’m not speaking to them. Those are grown men. They’re going to do what they want. I’m more so concerned by the people who follow behind, the people who they influence. I think it’s important to make people aware that there are strategic tactics that are formulated by the powers that be to try and manipulate the mind of the public. As long as people are aware of that and understand that, those tactics don’t have as much success.

Source >
This user contribution was reformatted and added to the record of T.I.'s views on 11 Jul 2022.