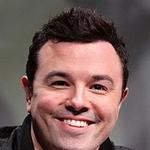 In an interview with The Advocate, Seth MacFarlane said

I credit my parents for raising me to be a logical person. I went to a very conservative boarding school called Kent with a lot of Republican students from very wealthy families, and a lot of times that does come with an unfortunate amount of negative traditionalism. I certainly remember hearing students use the word “fag” and whatnot, but it didn’t really register with me just because I hadn’t been directly exposed to any openly gay people yet. But then when I was, it was nice to find out that my brain was already set up the right way, so I didn’t give a shit.

Religion is a lot more sensitive on a weekly basis to standards and practices than anything, which pisses me off.

[The Parents Television Council are] literally terrible human beings. I’ve read their newsletter, I’ve visited their website, and they’re just rotten to the core. For an organization that prides itself on Christian values — I mean, I’m an atheist, so what do I know? — they spend their entire day hating people. They can all suck my dick as far as I’m concerned.

Source >
This user contribution was reformatted and added to the record of Seth MacFarlane’s views on 16 Aug 2022.