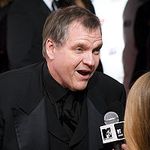 In a Mitt Romney’s rally in Ohio, Meat Loaf said

I have never been in any political agenda in my life, but I think that in 2012 this is the most important election in the history of the United States. Because there has (sic) storm clouds come over the United States. There is (sic) thunderstorms over Europe. There are hailstorms — and I mean major hailstorms! — in the Middle East. There are storms brewing through China, through Asia, through everywhere.

Source >
This user contribution was reformatted and added to the record of Meat Loaf’s views on 12 Aug 2022.