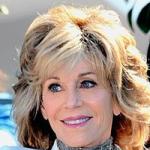 In an op-ed to the New York Times, Jane Fonda said

In just the past year, the United States has experienced deadly wildfires, devastating flooding and the hottest month ever recorded, all driven, at least in part, by climate change. What is President Trump’s response? He’s pulling the United States out of the Paris agreement and rolling back 85 environmental safeguards, including important and consequential climate initiatives. This should not be surprising; he once called climate change a “hoax.” The Senate majority leader, Mitch McConnell, is also blocking efforts to deal with the climate crisis.

We have reached a time in this fight when the only way forward is to organize, mobilize and vote politicians who won’t act out of office. We must overcome the power of the fossil fuel industry and elect an environmental champion for president and a congressional leadership ready to move forward aggressively with a Green New Deal to save us and the planet, starting the day they take office.

Source >
This user contribution was reformatted and added to the record of Jane Fonda’s views on 5 Jul 2022.