George Foreman and thoughts on Trump 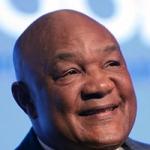 In an interview with The Telegraph, George Foreman said

Donald Trump has been a friend not only to me but boxing itself.

Somewhere deep down you pull for him to win. It would be good for politics to have some newcomer on the scene. I would have fun for the next four years.

I’ve voted for lots of guys. Some lose, some win. But I’d have fun with Donald Trump being president.

Source >
This user contribution was reformatted and added to the record of George Foreman’s views on 14 Jul 2022.