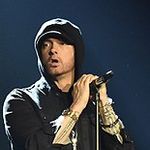 In an interview with Vulture, talking about Trump, Eminem said

He’s made the racists come out. He’s made it acceptable for the white man to feel oppressed.

He makes my blood boil. I can’t even watch the news anymore because it makes me too stressed out. All jokes aside, all punch lines aside, I’m trying to get a message out there about him. I want our country to be great too, I want it to be the best it can be, but it’s not going to be that with him in charge. I remember when he was first sniffing around politics, I thought, We’ve tried everything else, why not him? Then — and I was watching it live — he had that speech where he said Mexico is sending us rapists and criminals. I got this feeling of what the fuck? From that point on, I knew it was going to be bad with him. What he’s doing putting people against each other is scary fucking shit. His election was such a disappointment to me about the state of the country.

I’m not going to give any away now, but I’ve got lines ready if he says something about me. I get almost flustered thinking about him — that’s how angry he makes me. The people that support him are the people he cares about the least and they don’t even realize it. At what point do you — a working-class citizen, someone who’s trying to make shit better for you and your family — think this guy who’s never known struggle his entire fucking life, who avoided the military because of bone spurs, who says he’s a billionaire, is really looking out for you? He’s got people brainwashed.

I hope he gets impeached. I’d be there for that.

What has he really done for you in the year since he’s been in office? The tax cut is not going to help the middle class. It’s going to help Donald Trump. That people don’t see that is so discouraging. You know, there was even a time when I was mad at what was going on.

Yeah, Trump had me so mad with all his bullshit that I was thinking, I hope everybody who voted for him gets fucked and learns a lesson. But that was wrong. I don’t want any voters to get fucked; everyone’s trying to improve their lives. I just feel mad that Trump’s sold people a dream that’s never coming true. I want the division in this country to stop.

Source >
This user contribution was reformatted and added to the record of Eminem’s views on 3 Aug 2022.