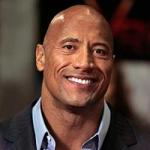 In an interview with GQ, when asked what he thinks of Trump's presidency, Dwayne Johnson said

Mmm… With any job you come into, you’ve got to prove yourself. And…Personally, I feel that if I were president, poise would be important. Leadership would be important. Taking responsibility for everybody. [If I didn’t agree with someone] on something, I wouldn’t shut them out. I would actually include them. The first thing we’d do is we’d come and sit down and we’d talk about it. It’s hard to categorize right now how I think he’s doing, other than to tell you how I would operate, what I would like to see.

I’d like to see a better leadership. I’d like to see a greater leadership. When there’s a disagreement, and you have a large group of people that you’re in a disagreement with—for example, the media—I feel like it informs me that I could be better. We all have issues, and we all gotta work our shit out. And I feel like one of the qualities of a great leader is not shutting people out. I miss that part. Even if we disagree, we’ve got to figure it out. Because otherwise I feel, as an American, all I hear and all I see in the example you’re setting is ‘Now I’m shutting you out. And you can’t come.’ [Disagreement] informs us. The responsibility as president—I [would] take responsibility for everyone. Especially when you disagree with me. If there’s a large number of people disagreeing, there might be something I’m not seeing, so let me see it. Let me understand it.

Source >
This user contribution was reformatted and added to the record of Dwayne Johnson’s views on 29 Jul 2022.