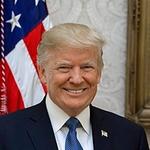 It’s a very very sad situation and hopefully it can be healed. We have a divider as a president. He’s the great divider and I’ve said it for a long time. […] What I’m saying is they are not necessarily wrong. There are certain people where unfortunately that comes into play.

I have to say, I think 99.9 percent of the police do an incredible job in the country,” said Mr. Trump. “I’m a big fan of the police of this country.

Source >
This user contribution was reformatted and added to the record of Donald Trump’s views on 5 Aug 2022.