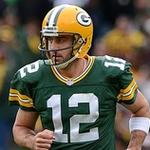 In an interview in the podcast Pretty Intense, Aaron Rodgers said

I started questioning things. I had friends with other beliefs. I enjoyed learning, it’s part of my life. I had some good friendships along the way that helped me figure out what exactly I wanted to believe in, and ultimately rules, regulations and binary systems don’t resonate with me.

It’s been a fun path to a different type of spirituality, which to me has been more meaningful.

Church on Sundays was more like, 'Make sure you dress a certain way, don’t bring that person, this person’s going to get looked at strangely if they show up. I think, again, it’s very black and white in a binary sense, but I don’t think it’s very welcoming.

Source >
This user contribution was reformatted and added to the record of Aaron Rodgers’s views on 13 May 2022.